Leave a comment Posted by KKai Orkut on September 5, 2013

I first thought there were fireworks and aurora and then realized red sprite lightning was the nature’s firework. :)

Infographic – How much caffeine is actually in your coffee 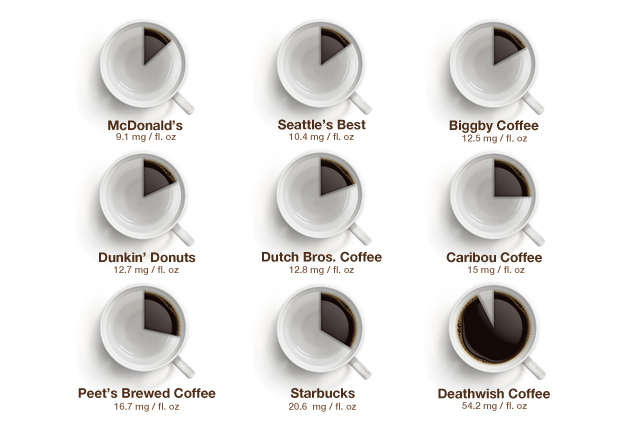 Coffee from Deathwish company contains highest amount of caffeine per cup. It is a terrible name for a coffee brand. People drink coffee to stay ‘alive’ or awake. Anyway, now you know even for coffee, they all are not created equally. :) *sips*

The Document That Created NASA

Leave a comment Posted by KKai Orkut on August 5, 2013

This guys downloaded twelve cloud-free, mosaic imagery of the Earth at each month of the year, re-projected those images, and created an animated gif using them. Really amazing!
Source: UXBlog

Waterspouts Over the Adriatic Sea The photo above shows an eye-popping complex of waterspouts I observed over the Adriatic Sea on a boat trip to Brindisi, Italy. As we departed, the weather was very summer like — some humidity, hot and sunny. Cumuliform clouds developed during our excursion, but the weather didn’t appear threatening. In fact, the atmospheric pressure was stable at 1024 millibars. Suddenly, we saw a line of funnel clouds straight in front of our boat! The photo shows the most recently formed waterspout in the foreground; the oldest spout, in the background, would disappear in a few seconds. Our boat actually passed through the scary funnels. The spouts were spaced about 1/3 nautical mile from each other. I asked the boat’s captain if he thought cruising past the spouts would be dangerous, but apparently, he wasn’t bothered much by their proximity. Nevertheless, waterspouts can generate winds of over 70 mph (F0 on the enhanced Fujita Scale) and can be hazardous to boaters. Othoni Island is at left center. Photo taken on July 23, 1999.

The Chemistry of 4th July Fireworks

Other commonly used chemicals are carbon which provides the fuel, oxidizers which produce oxygen for burning, magnesium which increases the overall brilliance and brightness, antimony that gives you a “glitter” effect and calcium which deepens the colors.